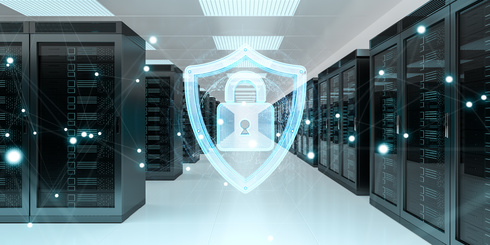 Concept of File and Folder Ownership

The owner controls how permissions are set and to whom permissions are granted on the files and folder. By default, the owner would be the user who created the object. In simple terms, if you created a folder then by default you become the owner of that folder and having ownership means you get to decide who can access the folder and gives you the power to transfer the ownership to another user.

Who can take and transfer ownership

As mentioned above, the default owner, the user who created the file or folder can transfer the ownership. But aside from the owner, other user or group with certain permission can also take the ownership. These are:

Why do you need to take the ownership?

Because you can! Just kidding! Have you tried deleting or renaming a folder but you get access denied? That’s most likely caused by lack of permission, and being the owner of the folder allows you to do some changes on that folder. This is just an example why taking ownership is needed, and I’ve listed couple more examples below.

How to take ownership of the files and folders?

In this example, we will take ownership of the System32 folder. Right-click the folder you wish to take the ownership and go Properties. Click on Security tab and then Advanced 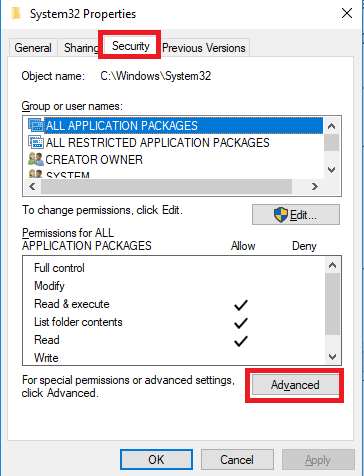 The Advance settings will show you the current owner of the file or folder. Click on Change 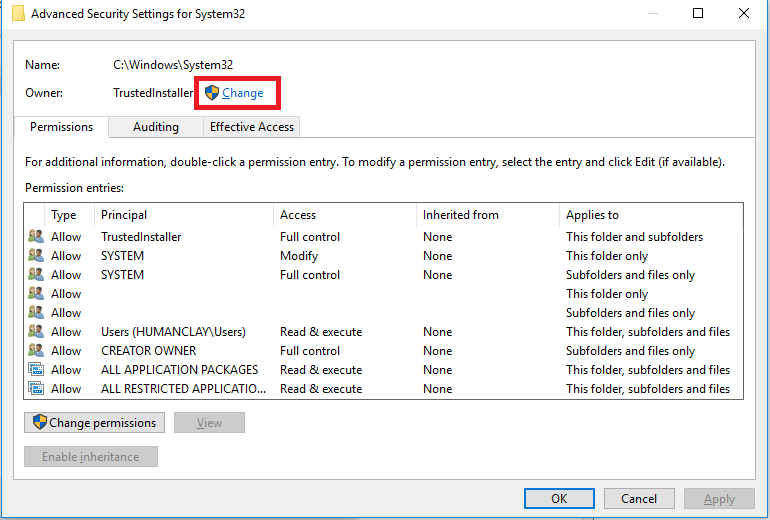 Enter the name of the new owner and click Check Names or click Advanced to find the user. 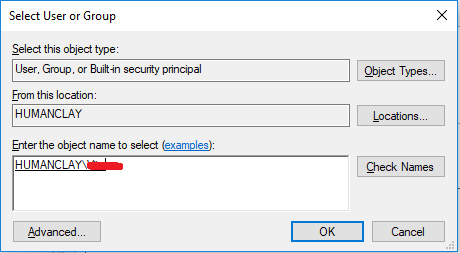 Once the new user is entered, click OK and now the new owner will be shown. Tick the option “Replace owner on subcontainers and objects” if you also want to take ownership of the subfolders and files. Click OK and you’re done! 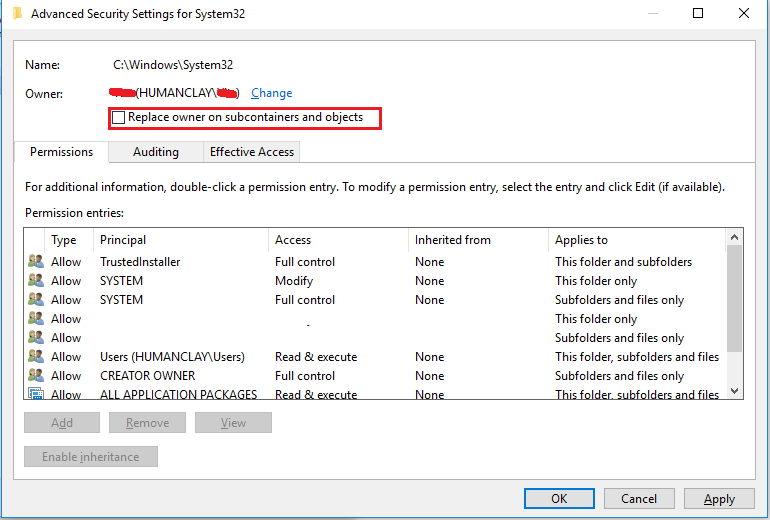 Although this article talks about taking ownership of files and folders, it is critical to know that taking ownership from TrustedInstaller can lead to system failure. The TrustedInstaller account is used to secure core operating system files and registry keys so unless you’re very sure of what you’re doing then I don’t recommend messing with this.

Taking ownership of files and folders will give user capability to override restrictions and allow them to perform the necessary task. However, always take extra precaution when changing the ownership especially on system files. Have I said that already? Well, that’s because I wanted to emphasize this. If you need to change it for temporary access then, by all means, do it but don’t forget to change it back to the original owner (TrustedInstaller) to avoid issues with the Operating System. You might also want to keep track of which folder a user own as some users may have taken ownership of certain folders. If you’re the only user or admin on your PC, then it might not be necessary but for a larger organization, having a tool like FolderSecurityViewer will help you with this task. Be sure to check it out!